Over the years of dedicated Research and Development, Frontier Pitts have designed and manufactured a premier portfolio of Hostile Vehicle Mitigation Security Products, including Terra Gates, Terra Barriers, Terra Blockers and both rising and static Terra Bollards.

These products are now installed protecting buildings throughout the UK and around the World at sites such as Utilities, Embassies, Government Buildings, Police Stations and Crowded Places. 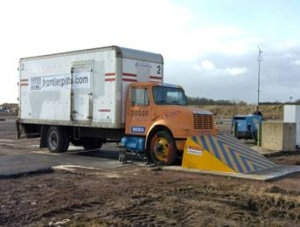 In 2014, Frontier Pitts are celebrating 10 years of Impact Testing of Vehicle Security Barrier with the successful impact test of the Terra Quantum Bollard 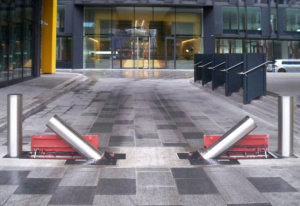 Over the 10 years, Frontier Pitts has seen a lot of changes within the Hostile Vehicle Mitigation industry. From the requirement of heavy engineered products that were required to stop a high level of energy and remain fully functional after impact, our clients now require aethestically pleasing HVM equipment that has been successfully impact tested to stop lower energies. For instance the Compact Terra Barrier looks like a standard car park barrier and can stop 3.5t @ 30mph. Click here for more information on the Compact Terra Barrier

Equipment with Surface Mount or Shallow (under 500mm) foundations have also become sought after in recent years as existing inner city sites seek to install the necessary impact tested HVM protection in existing foundations that are littered with underground utilities.