Designation: F 2656M–15 (which has superseded F 2656-07). Standard Test Method for Vehicle Crash Testing of Perimeter Barriers. This standard superseded the Department of State K ratings, as explained below: 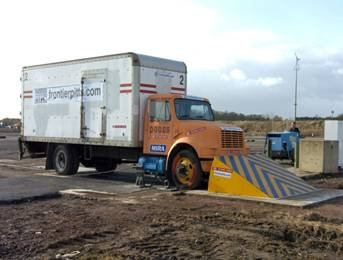 The Department of State Specification for Vehicle Crash Test of Perimeter Barriers and Gates was first published in 1985 as SD-STD-02.01. In that standard, the test vehicle was specified as a medium-duty truck weighing 6800 kg (15 000 lb). The payload was to be securely attached to the frame and nominal impact velocities were 50 km/h (30 mph), 65 km/h (40mph), and 80 km/h (50 mph). Penetration limits were 1 m (3 ft), 6 m (20 ft), and 15 m (50 ft) and were measured from the attack face of the perimeter security device to the final resting position of the front of the frame rails of the test vehicle.

In 2003, the U.S. State Department, Bureau of Diplomatic Security issued an updated standard (SD-STD-02.01, Revision A) for the testing of perimeter barriers. This update was done for several reasons. The foremost reason for change was limited setback distances precluded the use of any devices at their facilities or compounds that did not meet the highest test level, that is, those allowing more than 1-m (3-ft) penetration distance. Therefore, the revised standard only uses a 1-m (3-ft) penetration distance. Secondly, the method of rigid attachment of the ballast to the test vehicle was not simulating likely payload configurations and was altering the structural integrity of the test vehicle.
Consequently, the updated standard requires a payload consisting of 208-L (55-gal) steel drums strapped together that have been filled with soil. This assembly is then strapped to the vehicle load platform. The third reason for change was based on the observation that the cargo bed of trucks could effectively penetrate certain types of barriers. Accordingly, the penetration distance is now measured from the inside face or non-impact surface of the barrier to the front of the cargo bed when the vehicle has reached its final position. Lastly, it was determined that the trucks used different platforms within a given class affecting result consistency. The revised test standard now requires the use of very specific diesel-powered medium-duty trucks.