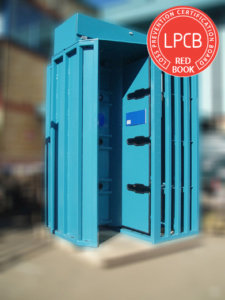 The Terra Diamond turnstiles are the only turnstiles currently on the market that are approved to LPS 1175 Security Ratings 3 and 4.

Sally Osmond, Brand Development Manager commented: Our client approached us with a very specific requirement for multiply LPS1175 Pedestrian Control systems. We worked closely with our customer and LPCB to achieve the standard, then fulfilled and exceed the projects specifications and expectations.

Solution:
Forsmark Nuclear Power Plant is one of the largest power plants in Sweden, situated on the east coast, in the province of Uppland. Forsmark has three boiling water reactors that generation rate 20-25 billion kilowatt-hours of electricity in a normal year. This is approximately one-sixth of Sweden’s total electrical energy consumption. The intention was to protect the power plant from unauthorised trespassing. The Turnstiles are used to provide access and authorisation to various zones within the power plant.The Turnstiles were operated using a Biometric reader system for entry and a card reader system to exit the protected area. The Turnstile were installed with positioning devices (switch) with relay contacts acting as an alarm that were interconnected to the local intrusion alarm system. The Turnstile finish was also required to conform to the environmental conditions at the power plant and to the Swedish Law and Regulations as well as European standards such as the Low Voltage Directive and the EMC Directive. Programmable requirements for the PLC were required to fulfil ISO 9000-3.

British Standards Regulations
The Terra Diamond Turnstile was specified as it is a rugged, heavy duty turnstile which complied with SS-ENV 1627 MK4 and British ”Loss Prevention Standard”, LPS 1175 issue 6, class 6, can be used if it complies with requirements of SS-ENV 1627 MK4. LPS 1175: ISSUE 6 Requirements and testing procedures for the LPCB approval and listing of intruder resistant building components, strong points, security enclosures and free-standing barriers