Frontier Pitts is proud and delighted to be named WINNER for the Sussex Business Awards International Business of the Year and Innovation of the Year!

Now in it’s 29th year the Sussex Awards have built a reputation as one of the most important dates in the business calendar since their inception in 1989.

Recognising business excellence across Sussex, these prestigious Awards are the longest established of their kind in Sussex and widely considered to be ‘the one to win’. 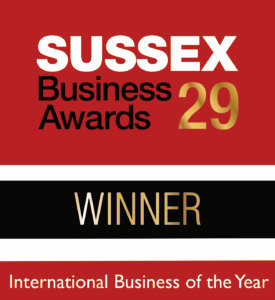 International Business of the Year

With more than 20 years of experience in Europe, the Middle East, the Far East and recent installations in Australia and Russia, we are at the fore front of the supply chain to most of the government states and critical infrastructure sites.
Despite all the challenges and difficulties of working in hostile environments, Frontier Pitts team of engineers installed all the equipment, whilst training local personnel, further cementing Frontier Pitts as the top name in the global HVM market.